a taste of louisville

For most people, Kentucky conjures thoughts of the Derby, bluegrass, bourbon ... But what I have found over the past year or so is that Kentucky, particularly the Louisville-area, is home to some truly wonderful food. While my visits are not entirely food-related the local food scene is a delicious bonus every time I visit. This week, we have been working through a long list of must-try restaurants, as well as revisiting old favorites. A little recap of the week so far:
Heine Brothers Coffee is a daily treat, and luckily one of their outposts is right around the corner, on Bardstown Road! A local roaster, Heine Brothers produces some of the best coffee I have ever had, most of it fair trade and organic. They have also partnered with several local businesses to for Breaking New Grounds, which composts coffee grounds and other food waste!
For all of the steak lovers out their, Palermo Viejo offers reasonably priced, perfectly seasoned Argentine-style steaks and sides. We tried their filet and strip steak - both on the rare side of medium - with parsley and garlic fries.
Cumberland Brews produces small batch craft beers on-site in their Bardstown Road brewery/pub. The beer is amazing, and the food is pretty tasty too. While I am not usually a fan of wings, their Jamaican Jerk wings are the perfect combination of sweet and zesty, juicy and crispy. 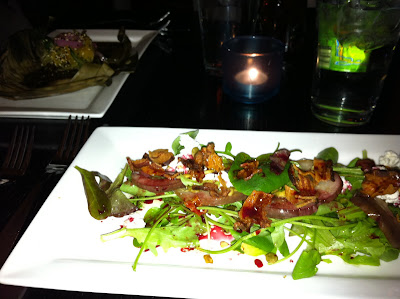 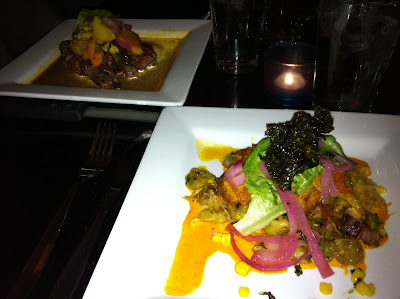 The Mayan Cafe, in the up-and-coming East Market Street neighborhood known as NuLu, offers dishes inspired by the traditional cuisine of the Yucatan. We tried the tamale - soft corn in a banana leaf, filled with tender steak and topped with mole; their seasonal salad, with roasted pears, crisp bacon, French feta, crunchy pepitas, and topped with a tangy pomegranate vinaigrette; traditional cochinita pibil - meltingly tender roast pork, topped with a sour and spicy achiote sauce, and served with the most amazing lima beans I have ever had (and I don't like lima beans!). The only disappointment of the evening was the Mayan Mocha. We were hoping for a spicy, cinnamon-scented mocha, but instead found something closer to hot cocoa. And it wasn't even very warm. 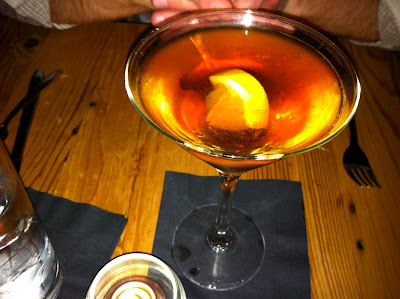 We discovered The Blind Pig in December, thanks to Yelp. Our first visit was so tasty that A. and I had to go back. So, back we went! Located in Butchertown, a fairly desolate, industrial nieghborhood, the Blind Pig has drawn many accolades in its first year of business, including garnering a review in the New York Times. The gastropub draws a diverse crowd, from twenty-somethings to well-heeled Louisvillians, all to try their house cured meats and enjoy the warm-ambience. Everything I have tried at the Blind Pig has been amazing, but my favorite menu item is their cassoulet - perfect, juicy duck confit, housemade garlic sausage, white beans. Basically the perfect cold-weather meal. Oh, and they also feature a small selection of creative cocktails, including the Bacon Manhattan, made with bacon-infused rye. A nice little twist on tradition. 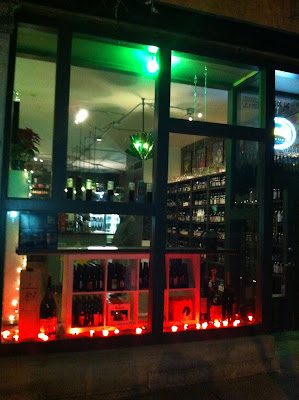 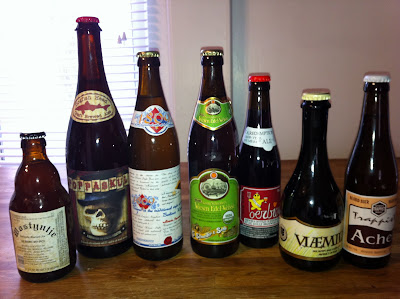 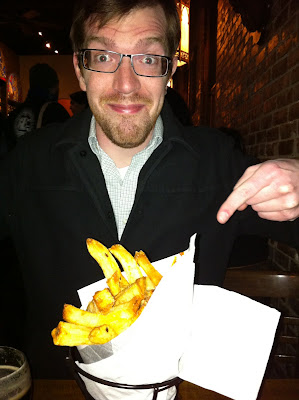 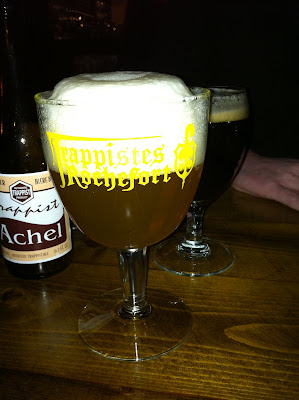 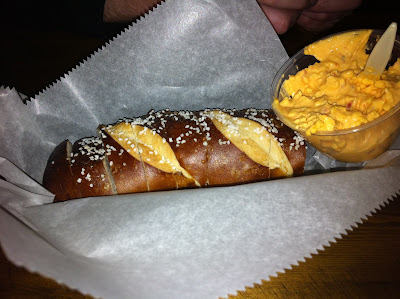 And, finally, two new places we discovered this week - the Louisville Beer Store and the Holy Grale. Both owned by a young Louisville couple, each offers an in-depth selection of hard to find brews. The Beer Store also sells glassware, hosts regular events, including their T.A.S.T.E. Sundays and talks by industry experts. They have also paired with neighboring resto 732 Social to offer snack plates on weekend nights. The Holy Grale - opened in December 2010 in a former church - offers a rotating selection of taps, including offerings from Birra del Borgo, Goose Island, and a bottle selection. They also produce an array of tasty bar snacks in their open kitchen, like their pretzel bread with beer cheese (pictured above), kimchi tacos, and cones of delicious, Belgian-style frites, with a choice of dipping sauces (we went with the curry ketchup, which A. described as "Epic.").
For my last night in town, we are headed to Seviche for a little Latin cuisine. Yum!
~ e
Posted by Erin and Darcy at 2:09 PM