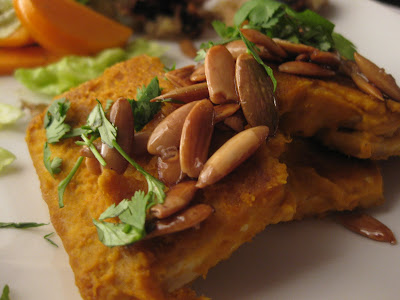 this is a concoction i made in order to use up the pumpkin leftover from pie making. i had a vision of pan fried tofu cooked in a thick peanut-y pumpkin-y sauce and think i did a pretty good job getting it from my head to our bellies. after the tofu i had quite a bit of extra sauce so a few days later i roasted some parsnips and then when they were almost done cooking tossed them with sauce and roasted a few minutes longer. also yummy!

tomorrow morning we head to atlanta for thanksgiving and i can't wait to see everyone and make loads of delicious food. happy thanksgiving everyone!

to make the sauce, blend all ingredients (except pepitas, cilantro and tofu) with a hand blender, in a normal blender, however you wish, until smooth. set aside.

to toast pepitas, heat a splash of olive oil in large nonstick skillet over medium heat. add pepitas. toss until starting to pop and brown, about 8 minutes; sprinkle with coarse salt and pepper. transfer to plate.

heat a small amount of oil in a pan and cook the tofu until browned in each side. mix a generous amount of sauce into the pan and mix to coat each piece of tofu. continue to cook for several more minutes, tossing the tofu occasionally.

serve topped with pepitas and cilantro. 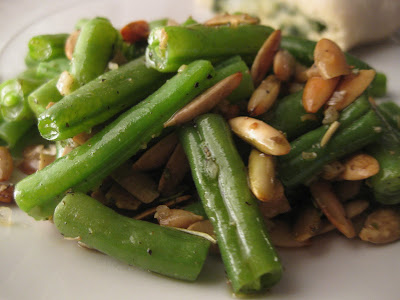 we made these for dinner the other night and decided about two bites in that they were a must for a thanksgiving side. i would highly recommend that everyone makes room on their thanksgiving table for these guys. they are so simple and delicious. the green beans get a nice crunch from the salty pepitas plus a little herb-y boost from the rosemary. and they get bonus points for coming together quickly on the stovetop while the oven is occupied with stuffing and pie and bread and other bake-ables. if you're making these for a large group double the recipe...at least.

heat 1 tablespoon oil in large nonstick skillet over medium heat. add pepitas. toss until starting to pop and brown, about 8 minutes; sprinkle with coarse salt and pepper. transfer to plate. reserve skillet. DO AHEAD: green beans and pepitas can be prepared 2 hours ahead. let stand at room temperature.

*i forgot to buy the rosemary and used dried. probably better with fresh but it was still yummy.

Posted by Erin and Darcy at 3:30 PM No comments: 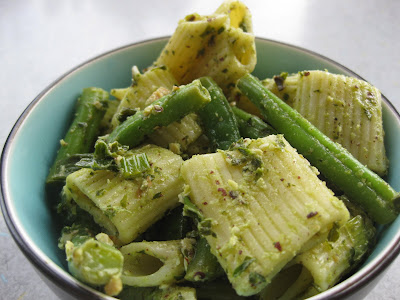 i loved this pasta because it was so bright and green for a winter dinner. green lemony pesto, fresh blanched green beans, little scallion slices....green green green! and yummy too! this is really as simple as cooking up some pasta and giving a few ingredients a whirl in the food processor. the original recipe called for some cheese but it honestly does not need it. kris and i both agreed that the recipe had plenty of flavor and wasn't begging for anything else.

blend first 5 ingredients and 1/3 cup oil in processor until nuts are finely chopped. season pesto with salt and pepper. 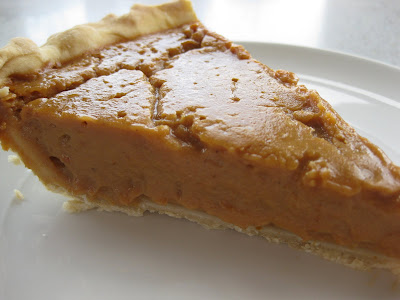 pumpkin pie is my favorite so this year i decided i need to make a vegan one for thanksgiving. with two weeks until the big day and not wanting to risk a soupy failure i had to start experimenting and fast. i started out by reading several recipes to get an idea of how to approach it. there are many that call for agar as the thickening agent but i find agar to be fussy plus it is super expensive and thus not what i wanted to play around with. i opted for the tofu route and asked my mom for her recipe because, ideally, i wanted it to taste just like hers.

shawn and kate came over for dinner and served as additional tasters. the consensus? taste was spot on! it was slightly looser than i had hoped, however it still cut into nice slices without falling apart. i put the uneaten part in the fridge and by the next evening it had firmed up a bit more.

so my thanksgiving plan? bake this pie the day before, refrigerate, then bring to room temperature before serving. 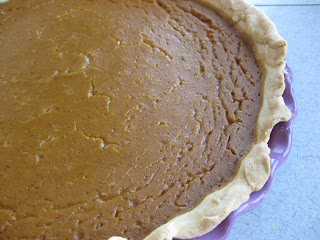 preheat oven to 350 and have your pie crust in the pie plate and ready to go.

in a large bowl, whisk the cornstarch into the milk until dissolved. add spices and sugar and whisk until combined. add tofu and pumpkin and blend until smooth (i whisked and then used an immersion blender, but you could also just do everything in a blender to begin with)

pour into pie crust and bake for about an hour, until the center looks firm. let cool and refrigerate overnight for optimum firmness. 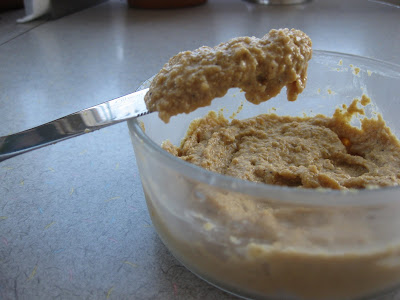 i have been talking about making mustard forever. i knew it wouldn't be hard. i also knew that, with a large bag of mustard seeds in the cupboard, i probably wouldn't even have to buy anything to make a basic mustard. i looked up recipes online, i looked up recipes in cookbooks and ooh-ed and ahh-ed over them. it's been going on for quite some time now. well finally i actually did it! i think it was the combination of seeing a recipe while flipping through bon appetit for a delicious sounding mustard with bratwurst bites and well it just so happened i made a batch of vegan sausages the other day that were chilling in the fridge begging for some beer and horseradish* mustard. the recipe calls for lager but i used modelo, i don't think it really matters. also, when looking for prepared horseradish make sure you don't get the kind loaded up with cream and eggs, just plain old horseradish. anyway, this is yummy with some kick from the horseradish but not in an overwhelming, sinus clearing way.

*horseradish, much like sauerkraut, is a food i never liked. i think my change of heart towards the kraut inspired me to give horseradish another go. and i like it! i mean....i wouldn't eat spoonfuls of it but it's much better than it was when i was a kid choking it down on a piece of matzoh at our passover seder ever year. that was the worst.

this weekend i had the pleasure of attending the foodbuzz food blogger festival here in san francisco. i met some awesome new food blogger-y friends and enjoyed so much free stuff they really did spoil us; cocktails, kitchen gadgets, wine, beer, chocolate, jam, salt....i could go on and on though i must say my biggest score was a bottle of olive oil from the olive oil tasting....perfect timing as our bottle just ran out.

and of course tasting and talking about food all day put me in the mood to cook cook cook.

sunday started off by forgoing our usual weekend bagel trip for homemade breakfast of waffles and tempeh bacon (devoured...not pictured). 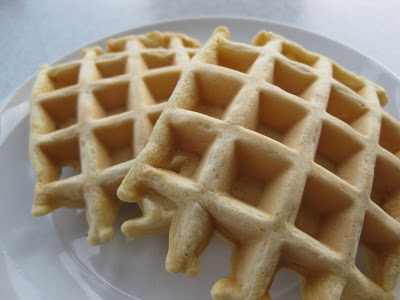 then what for dinner? well anytime we're looking for a big dinner project the artful vegan seems to be the place to turn. i think this was the first time i actually made complete recipes from there...usually they overwhelm me so i just pick and choose bits from a few recipes and put them all together in my own way. somehow it seems less daunting that way. this time we chose three appetizers to make (please forgive the poor lighting, setting the clock back is bad for food blogging).... 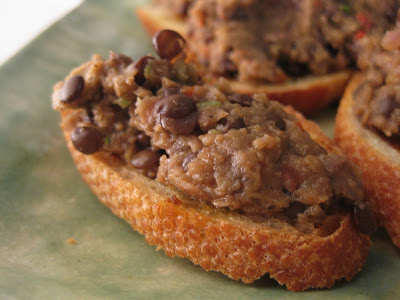 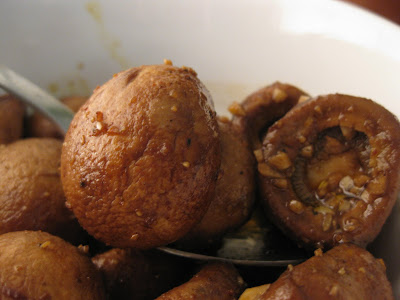 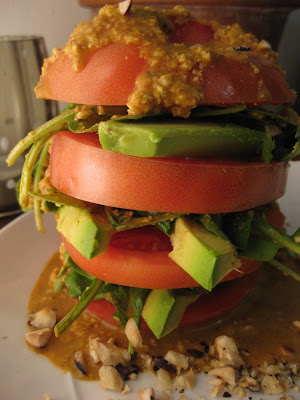 all in all a fun and delicious weekend! 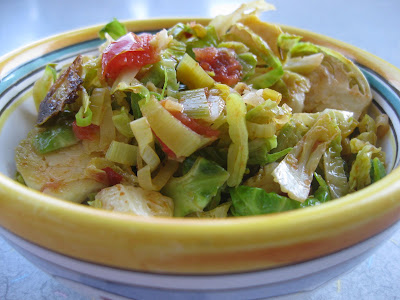 this is just a quick lil side dish i whipped up the other night. everything is sliced very thin so it cooks in no time! i think brussels sprouts slaws are also a good way to get those who claim to hate the sprouts to change their minds. anyway, kris said it was really good so i snapped a picture and decided to share.

put enough oil in a pan to coat the bottom and heat over medium. add the leeks and saute until they begin to soften. add tomatoes and sprouts and cook a few minutes until sprouts are softened and bright green. add spices to taste and you're done! 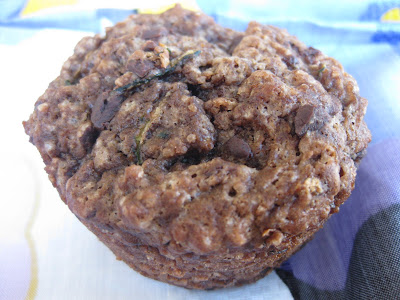 my mom makes the. best. zucchini cake. it is light and moist and amazingly delicious and she serves it with fresh whipped cream. it really is fantastic. i haven't tried making a vegan version of her recipe (though after writing that it has shot to the top of my to do list) but when i saw this recipe in gourmet i imagined her cake in cupcake form with chocolate. well....that's not quite what i got. according to gourmet these are cupcakes but i'm calling them muffins because they are really much denser than the ideal cupcake should be. plus they don't have any frosting on them so they don't have that cupcake-y feel when you're eating them.

however! i'm not saying these are bad. no no no...put yourself in a muffin state of mind and they will hit the spot. they are full of chocolatey goodness and with the flecks of green zucchini you can trick yourself into believing that they are healthy and a perfectly acceptable breakfast muffin. i made slight alterations to the recipe 1. to make it vegan and 2. based on what i had on hand. 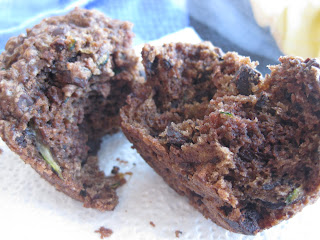 preheat oven to 350°F with rack in middle.

whisk together sugar, oil, yogurt, and vanilla in a large bowl until thick and creamy, 2 to 3 minutes. mix in flour mixture until just incorporated. stir in zucchini and chocolate chips.

divide among lined muffin cups and bake until tops spring back when lightly pressed, 30 to 35 minutes. cool in pan 5 minutes, then turn out to cool completely.