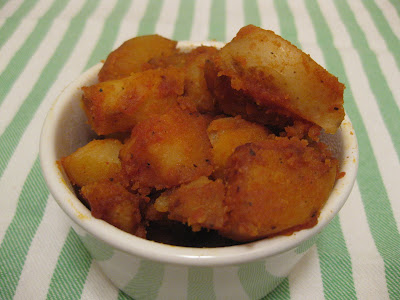 it's a new month and that means time to focus on a new cookbook. i have mixed feelings about the book i'm delving into for january because the results of past recipes from it have been, well, meh. but it's a new year, a time to set aside hard feelings and start fresh, and i want to give this book a fair chance to redeem itself to my tummy. so here we go vegan fire & spice....let's see what you've got!

one of the issues i've had with this book in the past is that i make a recipe expecting one thing and it comes out as something different. maybe the secret is to make things that i have no preconceived notions of. or maybe the trick is that i have to make everything twice. once as written and then i figure out what i would change and make it again and it comes out much better. the latter is what i did with the first recipe this month - spicy spanish potatoes, or patatas bravas for those of us that frequent tapas restaurants.

the main problem the first go around was that they said to cut to potatoes into thin slices, which i did, ignoring my gut that was screaming "this is not how patatas bravas are done!" they turned too mushy and turned out as more of a tasty potato clump thing. this time i cut the potatoes in bite sized chunks that look like the ones you get in a restaurant. the amount of sauce in the recipe for 1 1/2 pounds of potatoes got me nowhere and i had to triple it. i might have had a little more than 1 1/2 pounds but i certainly didn't have 4 1/2 pounds. so anyway, the bottom line to this ranty post is that, while these were tasty, the recipe needs a good amount of tweaks to pass for patatas bravas. here's how i would write it:

cut potatoes into bit sized chunks. heat the oil in a large skillet over medium heat. add the potatoes in a single layer and cook, turning occasionally until tender and slightly crispy on the outside. season with the salt, pepper, cayenne and paprika.

meanwhile mix together the vinegar, tomato paste and water in a small bowl. when the potatoes are cooked remove from heat, transfer to a bowl and toss with the sauce.