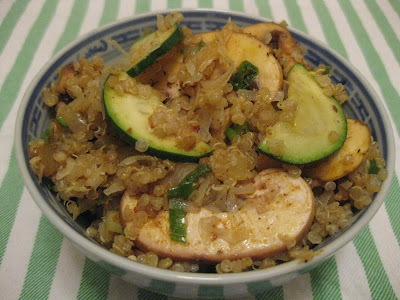 alright vegan fire and spice, time to give you another try. this time we decided to try out the indonesian coconut rice for an easy weeknight dinner, but we made it coconut quinoa instead cause we weren't feeling rice-y. this dish was bursting with flavor i certainly can't fault it there. it had garlic, ginger, turmeric, cinnamon, pepper flakes, mustard powder, cloves...phew! so yes. flavorful indeed. and they recommend serving it with vegetables so we mixed in some zucchini and mushrooms. in the end this was a pretty good dish but my gripe is that the whole time i was eating it i just kept thinking that the coconut should have been toasted before adding it into the mix. it's just one tiny step and i think it really would have stepped the whole thing up a notch with a deeper, toastier flavor as well as a little crunch. the suggested peanut garnish probably would have been a good move too...it just felt like something was missing.

we're now half way through the month and i've only made two recipes from the book...yikes! time to step it up and find something awesome in here.
Posted by Erin and Darcy at 4:10 PM

Hi there, Toasting the coconut for this recipe is a great idea! I'll be sure to add that as an option for the next reprint of the book. And yes, the peanuts really do add a special something -- plus I like the rice better for this than quinoa. I'd be happy to recommend some of my personal favorites from this book if you like.

thanks for the note, robin. i would love some recommendations!

Okay, here are some favorites of mine and other testers/reviewers:

And, of course, as I say in the book, please feel free to season to your own taste, since everyone's palates are a bit different. Hope you enjoy!

wonderful! can't wait to try these out.