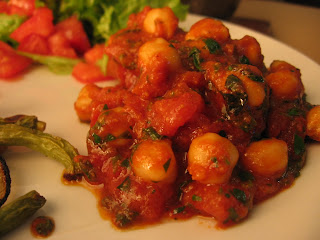 i have a bad habit of flipping through my cooking magazines, finding a bunch of things i want to make, and then putting the magazine away and forgetting all the delicious possibilties inside. i'm trying to do better. this one comes from the march issue of gourmet and the dish was fantastic. i love the heartiness of chickpeas and the fresh herbs in here made the flavors really pop as well. this was easy to make and you probably have most of the ingredients already. we had it as a side but it would also be a good entree served over rice (or any other grain for that matter). and it gets bonus points because it held up well for leftovers for lunch the next day.

heat oil in a 12-inch heavy skillet over medium heat, then cook cumin, coriander, ginger, red-pepper flakes, and cinnamon stick, stirring constantly, until fragrant and a shade darker, about 2 minutes.
add tomatoes with juices, breaking up tomatoes with a spoon, then add chickpeas. simmer, stirring occasionally, until slightly thickened, about 20 minutes. discard cinnamon stick.
stir in parsley and mint. serve warm or at room temperature.

*in my mind the instructions to buy 2 cans of chickpeas meant only buy one at the grocery store, so our version was a bit more tomatoey then it's supposed to be but it was still yummy.

I often "make" something similar to this in my dining hall by mixing chickpeas, tomato sauce and whatever spices they have on hand in an attempt to make the food palatable. But this seems transcendent, especially with the coriander (one of my favorite spices!). If during spring break I inexplicably have a terrible-dining-hall-food craving, I'll know what to make.

Darcy I love your blog! This dish sounds yummy! Im gonna make it!

I just found this recipe in Gourmet. I wasn't really itching to make it, but after reading this post I'm pretty turned on to the idea!