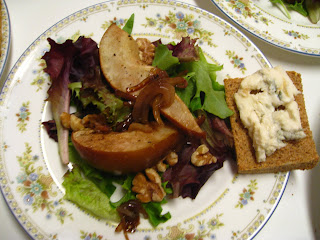 I love this salad. It is one of the easiest and yet most elegant things I have ever made. It barely requires a recipe, is a cinch to make for a crowd, and belongs in your recipe box. It has a tangy sweetness, and when served with a nice blue cheese it really is out of this world. Make. It. Now. And share it with friends. Please. We don't need to be greedy here. 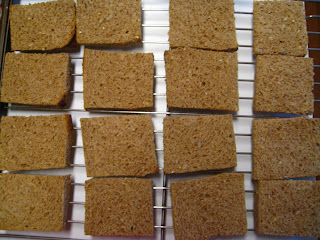 The original recipe comes from Susan Spungen, champion of simply elegant dining. Her recipe calls for seckel pears - the itty bitty ones - but I prefer bosc or bartlett pears, as they do not get too mushy when baked. You can use just about any kind of blue cheese - I prefer a gorgonzola, either mountain or dolce, depending on how I feel that day - and you could leave it out altogether and still have a great salad.

And as a little aside, I must share a little story of my history with pear. I never used to like them, and think I was traumatized by those kindergarten snack times when we had canned pear halves that Teacher Connie made to look like little bunnies. They had cottage cheese tails, raisin eyes, sliced almond ears and little licorice whiskers. They were kind of cute. And I hated them. I would not eat them, and must have gone hungry on those days, but could not deal with the texture of any of those components. If anything, I ate the licorice and left the rest. Any of you who know me well know that I still will not eat cottage cheese and have a tenuous relationship with raisins. It took me nearly 20 years to come to terms with pears, which I now enjoy, and I think this recipe, which I first made a few years ago, aided in my conversion! 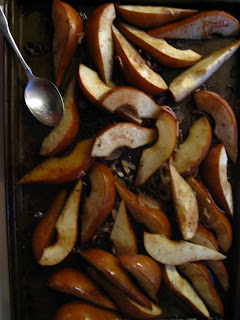 Cut each pear half into two or three wedges, lengthwise, and arrange in single layer, along with the sliced shallots, on a sheet pan. Drizzle with oil and vinegar, sprinkle with salt and pepper, and stir to coat. Bake in a 350 degree oven for 20 minutes or so until shallots are very soft and pears are cooked through (i usually stick a paring knife in one to test - if the knife comes out easily, pears are done!) Set aside to cool.

Whisk together the vinaigrette ingredients.

To assemble salad: plate a handful of arugula/mixed greens (I prefer the peppery contrast the arugula provides to the sweetness of the pears). Top with 1/4 of the pear mixture. Sprinkle with toasted walnuts, drizzle with vinaigrette. Serve a slice of wheat toast topped with gorgonzola on the side. Enjoy!

Ooh, I'm really excited to make this when I go back for Spring break because almost everyone in my family adores Gorgonzola cheese. And believe it or not, this classic blue cheese-pear combination is something I haven't tried at home yet! Thanks for the recipe :)