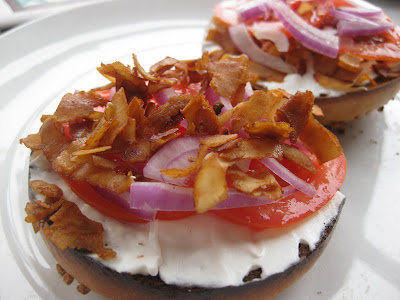 i don't normally repost recipes that i make from other blogs but i must share this one because if you have not heard about the magic of coconut bacon you are really missing out! sure, tempeh bacon is good stuff but this! this is amazing. the flavor is similar but it has a crunch that i have never been able to get from tempeh bacon. and sometimes maybe you just want to lay off the soy and switch things up a bit. well coconut bacon to the rescue!

the blog i found this on is called good good things. i made mine much the same way as she did - soy sauce, liquid smoke, maple syrup (and i added apple cider vinegar) in a bowl to taste. you can search for a recipe if you want but this isn't a science and i think it would be pretty hard to mess up. into that mixture add a bunch of large, unsweetened flaked coconut (i found mine at the bulk store in my neighborhood). toss it around to cover all of the coconut and let it sit for a bit while the oven heats up to 350. spread it out on a baking sheet, good good things recommends 10 minutes then stir it around and keep a close eye, checking and stirring every minute. good advice. when it's done take it out and let it cool for a minute and it should be nice and crisp crisp crisp. it does retain a slight coconut flavor and that is not a bad thing. trust me.

first we made blt's (obviously) and they were yummy. but this morning was when the amazingness happened. vegan jackson crooks for breakfast. for those not in the know a jackson crook is a bagel sandwich from bagel rising in boston. i have never had one myself but kris loved them back in the day and many argue that they are the best bagel sandwich there is. so that's what you see pictured at the top of this post: bagel (garlic here), coconut bacon, red onion and tomato. i cheated and went open faced. kris made a proper one sandwich style. 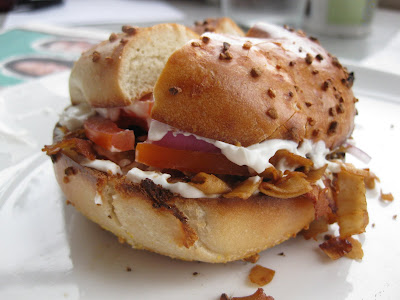