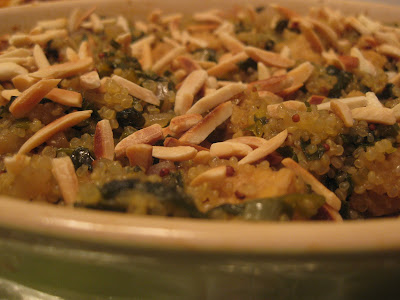 i stole the idea of baked quinoa from kate. i had never thought of cooking it this way before and after talking about it with her i was excited to give it a try. i used kate's method as a general guideline and then started winging it and i think it turned out quite well! however mine took twice as long to cook as hers did (an hour rather than 30 minutes) so, while it was tasty, i couldn't help thinking that i could have made this normal quinoa-bowl style in a third of the time. still! a fun experiment and a great solution if you're in the mood to just throw a bunch of stuff together and forget about it for awhile while you go about your business. 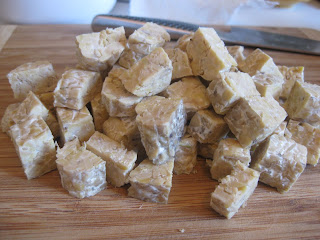 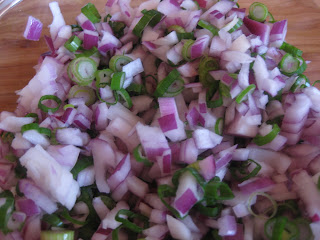 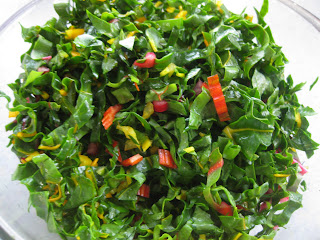 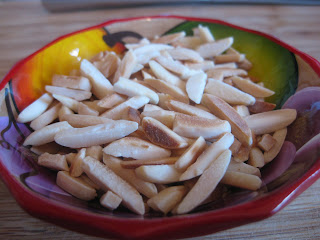 for vegetables i used red onion, scallions and rainbow chard and then bulked it up with maple-mustard marinated tempeh and sprinkled almonds on top for crunch. the flavor was good but i felt that it was missing something. kris suggested that indian spices might be a nice addition and i completely agree so that might be a fun avenue to explore.

preheat your oven to 350. mix together the marinade ingredients in a baking dish (i used a 1.5 quart oval dish) and let tempeh marinate while you prepare the rest of the ingredients.

heat a splash of oil in a pan and saute the onion and scallions until softened, add the chard and cook until just wilted. add the broth to the pan and when it boils add the quinoa a stir. season with salt and pepper. pour into the baking dish with the tempeh and marinade and mix to combine. cover with foil and cook for about an hour or until the liquid is absorbed and the quinoa is soft. sprinkle toasted almonds on top and serve!

I’d like to personally invite you to join the CookEatShare Author network. CookEatShare has had over 2.5 million unique visitors in 2009, and I think they will be interested in your content. Users will be guided to your actual blog, so this is a free way to increase page views and visitors to your site.