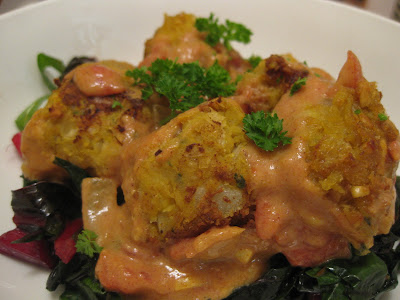 for chrismukkah i got several new cookbooks to add to the collection, one of them is vegan fire and spice by robin robertson. it's a collection of spicy vegan recipes from around the world and i wasted no time breaking it in. first up? the chickpea based curried no-meat balls from india cooked in a yogurty tomato sauce. the book suggested serving them over basmati rice, which i'm sure would be really good and would soak up the sauce well, but we had a rice-y dinner the night before so i served them over smokey sauteed rainbow chard. i really liked the flavors (and that's what really matters) and would make them again but i did have a few issues with the recipe. the balls were very fragile and difficult to brown without crumbling. i found it was easier to brown them in a non-stick pan with the thinnest coating of oil rather than using more oil as the recipe instructed. i did use a potato masher instead of a ricer to mash the chickpeas....maybe that's why. i would also recommend chopping the ingredients for the balls as finely as possible. anyway! here's the recipe, with some notes.


place the chickpeas in a bowl and blot dry. use a potato ricer (or masher) to mash the chickpeas. add half of the chopped onion, the peanuts, ginger, cilantro, 1 teaspoon of the curry powder, 1/8 teaspoon of cayenne and salt to taste. mix well, then shape into 1-inch balls. heat just enough oil to thinly coat a non stick pan and brown the balls on all sides. remove with a slotted spoon and drain on paper towels.

heat another glug of oil on the same skillet. add the remaining onion and brown lightly. add the garlic, cinnamon, cardamom, turmeric, coriander, the remaining 1 teaspoon of curry powder, the remaining 1/8 teaspoon of cayenne and salt to taste. cook, stirring for 2 minutes, then stir in the tomatoes and simmer for 5 minutes, to blend the flavors. remove the pan from the heat and whisk in the yogurt. carefully add the balls to the sauce, and warm over low heat without boiling. serve garnished with parsley.