a pakora and samosa attempt, and tamarind to the rescue! 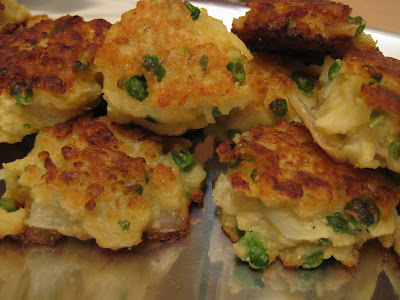 pakoras and samosas are two of our favorite indian treats so when kris showed me the recipes on pages 142 and 143 of vegan fire and spice i was eager to try my hand at them at home. well yesterday was the day and after much work and anticipation the results were....meh. don't get me wrong, they did taste good they just didn't taste like the pakoras and samosas that we love. the pakoras reminded me of a cauliflower latke and the samosas were enormous and too doughy....like calzones. 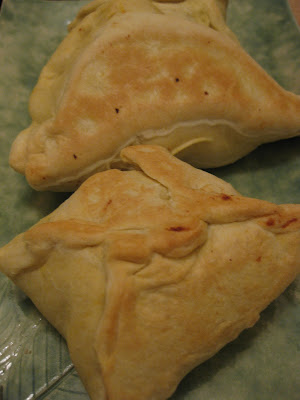 i think there were a few factors that lead to the un-indian like results boiling down to poor instructions. i know that pakoras are made with chickpea flour so i should have taken a hint that my results might not be up to snuff when the recipe called for all-purpose flour. i made the switch to chickpea flour but when the recipe said "add enough water to make a batter" i was a bit stumped. thick batter? thin batter? well if you decide to make them, stay on the thick side.

with the samosas the filling was good but the dough portion of the recipe was what steered me wrong. the instructions say to roll the dough into four pieces but makes no mention of how thick to roll it out. well let me tell you that it can be rolled out quite thin and really a single recipe could easily make eight normal sized samosas i think. as i said, mine resembled calzones. oops.

the third problem? some foods just need to be deep fried. while i appreciate not being instructed to deep fry at home, i think doing so would have resulted in a finished product closer to what i was hoping for. both were shallow fried until golden and the samosas were then transferred to the oven to finish cooking.

however there was one part of this samosa/pakora experiment that turned out exactly as i wanted....the tamarind dipping sauce! simple to make yes, but instead of taking the easy way out with tamarind concentrate i decided it was time to try out the block of dried tamarind we've had for....well....quite some time now. 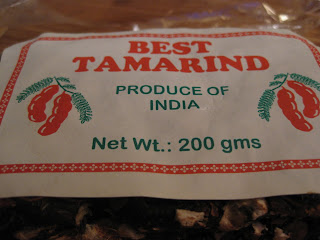 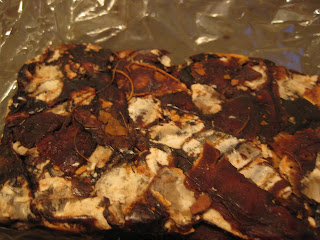 so as a small consolation for not being able to share an amazing pakora or samosa recipe i give you a yummy tamarind sauce! 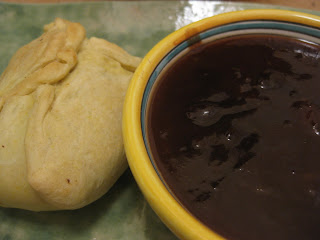 begin by reconstituting the dried tamarind. cut off a hunk and break it up a bit into smaller pieces. place in a bowl and cover with hot water. let sit until softened, about 15 minutes. once softened drain and place tamarind in a food processor and blend until smooth (there might be some big seeds that you need to remove).

measure 3 tablespoons of tamarind and combine in a saucepan with 1/2 cup water, sugar, ginger and cayenne and simmer over low heat, stirring occasionally, until thickened and syrupy, about 10 minutes. cool before serving.