fettucini with leeks, sunchokes, and kale 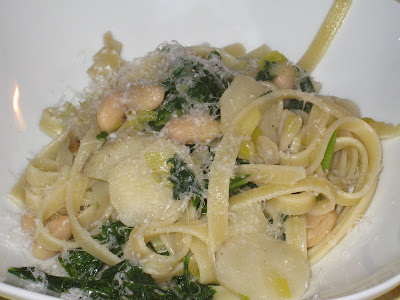 I have been a very bad blogger. I'm not really sure what happened . . . or rather, I'm not sure how I have been so lazy about blogging. I'm still cooking, still inventing, but just have not made the time to record things here, on the yumcoast. And last weekend, I decided it was time to remedy the situation, after realizing I had seemingly dozens of recipes - with pictures - just waiting to be shared with you.

On my way home from work, I stopped at Whole Foods. I did not have a plan for dinner, but knew I wanted to make something healthy. My days spent at the cupcakery need to be offset by veggies and other healthy goodies, so I wandered about the produce section, uncertain what to make. I saw kale - both green and purple. Every food magazine on earth extols the virtues of this leafy green, which I enjoy a whole lot more than its friend, Swiss chard. So I picked up a bunch of kale, and leeks were lying right there too, so I grabbed one of those. While I was looking at mushrooms, I saw local sunchokes - from Vermont - and plucked a few of those as well. If you are unfamiliar with the sunchoke - or Jerusalem artichoke - it is a tuber, a relative of the sunflower, with a flavor similar to artichokes. I enjoy their earthy sweetness, and they are rather easy to prepare. 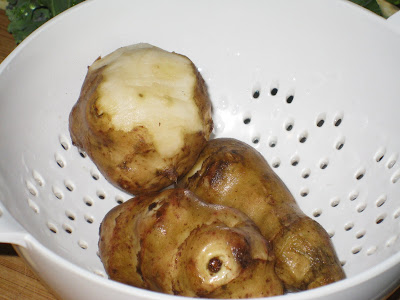 I decided to combine the kale, leeks and sunchokes in a pasta with fettucini and a few white beans. The pasta was rather delicious, and exactly what I wanted. Flavorful, balanced, healthy. and easy!

Heat 1 tablespoon olive oil in a 4 quart saute pan (or 12 inch frying pan) over medium high heat. Add leeks and cook until softened, 5-10 minutes. Add in sliced sunchokes, season with salt and pepper, and saute for 2-3 minutes. Add vegetable stock and bring to a boil.

In the meantime, bring a small pot of water to boil. Add 1 to 2 teaspoons salt. Add kale and boil for 2 minutes. Drain kale, remove any tough stems, and set aside.

Simmer the leek and sunchoke mixture until most of the liquid has evaporated. Add in white beans, stirring to combine. Add in kale, cooked fettucini. Season to taste with salt and pepper. Serve sprinkled with freshly grated parmesan.