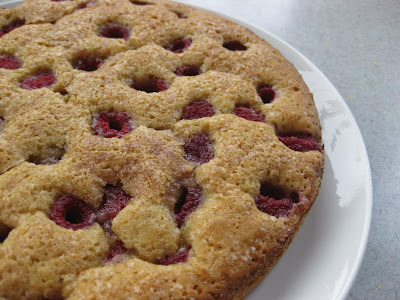 i have made this cake twice now. the first time was for a bbq when we were in atlanta about a month ago. deb wrote about a raspberry buttermilk cake on smitten kitchen and i thought it looked so simple and was convinced that, yes, this is the perfect cake to make in a hurry. it got rave reviews and was polished off in no time at all! i made a vegan version and i think my brother was a little upset that i wasn't cranking these out when he was vegan and i was...12. better late than never!

the second time i made this cake was last weekend and i made it by accident. i mean...i did mean to make a cake...i just didn't mean to make the same one. i flipped through some magazines and saw this in gourmet and thought "hey! that looks really yummy and kind of like the awesome cake i made in atlanta." i think i was about half way through when i realized that yes, it's the same recipe. but i wasn't even disappointed. i was just excited to get to eat this cake again. that's how fantastic it is! and once again, rave reviews all around.

so in case you missed this recipe or just want an excuse to make it again (if you don't have an excuse, just pretend you don't realize it's the same one. it's ok. nobody will tell) here's the recipe again. and to shake things up, here's the vegan version. 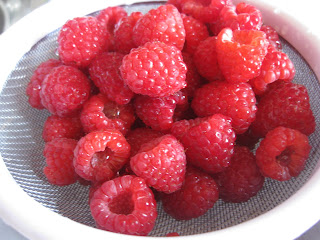 preheat oven to 400 with rack in middle. butter and flour a 9-inch round cake pan.

mix apple cider vinegar into soymilk and set aside to curdle.

beat margarine and 2/3 cup sugar with a mixer at medium-high speed until pale and fluffy, about 2 minutes, then beat in vanilla. add cornstarch mixture and beat well.

at low speed, mix in flour mixture in three batches, alternating with curdled soymilk, beginning and ending with flour and mixing until just combined.

bake until cake is golden and a wooden pick inserted into center comes out clean, 25-30 minutes. cool in pan 10 minutes, then turn out onto a rack to cool to warm, 10-15 minutes more. invert onto a plate and serve!