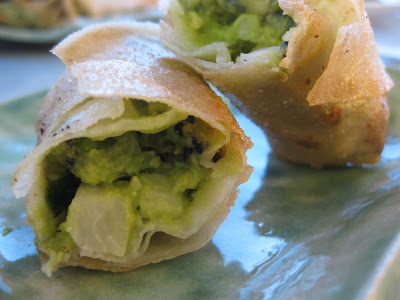 these were inspired by a dish i used to be obsessed with...the avocado eggrolls at the cheesecake factory. sadly, last time i had them they were not as good as they used to be but that's probably for the best. anyway, i still think that the idea is brilliant: crispy fried outside housing a warm, creamy inside of mashed avocado goodness.

for my filling i used the asian guacamole which is one component of a salad in the artful vegan. i used the same wrappers that shawn and kate used when they had us over this night. i remember them saying that the wrappers were really weird to work with and they weren't kidding! they don't stick to themselves at all but once fried they do hold a shape. use whatever wrapper you choose but don't be too worried if they seem like they're not working...i bet your problems will be solved when you start to fry. although i would recommend rolling them as tightly as you can to prevent too much oil from seeping inside when you fry them. one thing that i really loved about making these rather than traditional springrolls is that they are so much easier to assemble! none of this careful placing and stacking of ingredients, just plop a blob of guac on there, roll it up and move on! 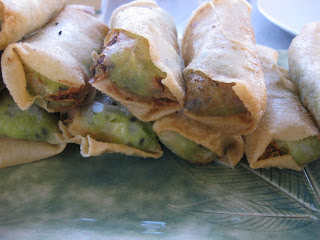 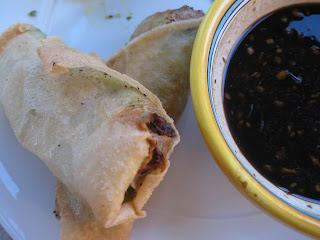 combine all the filling ingredients in a bowl and mix well.

place the wrapper with a point facing you. put a large spoonful of filling in the lower third of the wrapper. roll the point over the filling, fold in the sides and continue to roll tightly. repeat until you are out of filling.

heat a few inches of canola oil in a deep pan or medium sized pot. fry each roll until golden brown. eat alone or with a dipping sauce (i made a tamarind based sauce).