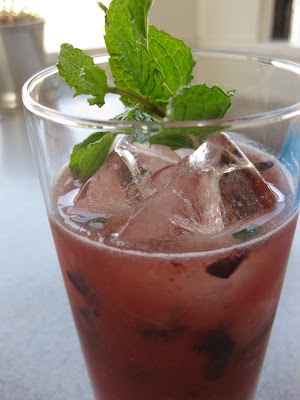 not too long ago erin and i were chatting and she mentioned a mojito that she made with vodka and blueberries and basil (i think) it sounded really yummy and refreshing and hopefully she will share the recipe (hint hint). but it got me thinking about a blueberry mojito recipe that kris and i saw featured on a food network show...oh geez...probably years ago at this point. they are made with vodka instead of rum and include muddled blueberries as well as the traditional mint and lime and get a little extra kick from a ginger infused simple syrup. right up my alley! you can certainly make these individually in separate glasses but the silly thing is that i never made them because i wanted to make a nice big refreshing pitcher of them. and i didn't have a nice pitcher (or any pitcher...i wasn't that picky!). but this past weekend, thanks to being engaged and having gifts occasionally show up at the apartment, we were finally armed with nice, brand new pitcher (thanks mo and tom!!!) and mojitos were made! and what timing with blueberries being in season.

these did not disappoint. they are really yummy and refreshing on a hot day (and it actually felt like summer here!). the only thing is that we found the recipe as written a bit sweet for our taste. i would suggest adding the simple syrup in smaller increments, to taste. 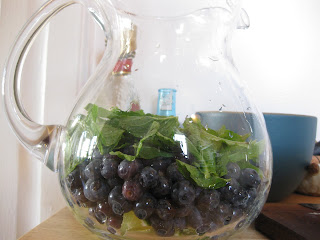 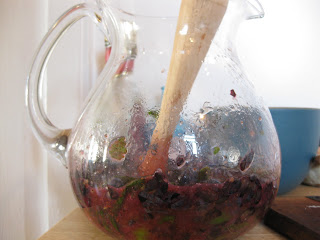 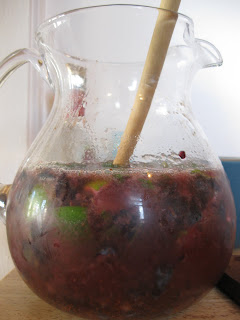 put the blueberries, lime wedges and fresh mint leaves in the pitcher and muddle until the blueberries are broken and the mint and lime release their juices and flavor. add the simple syrup, vodka and top off with club soda. give it a little stir and pour into glasses with ice cubes. garnish with blueberries and mint if you want to be fancy.

peel and grate the ginger and add it, together with the sugar and cold water, to a saucepan. bring it to the boil and stir until the sugar dissolves. cover and let steep for 15 minutes. strain and cool in the refrigerator when done.