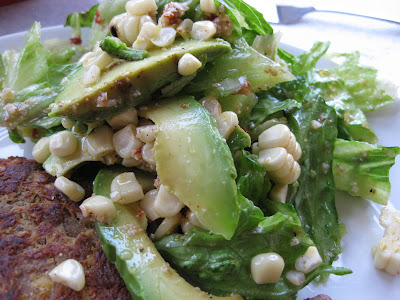 show me the words 'grilled avocado' and i'm sold.

such was the case with the june issue of gourmet, which is the grilling issue and brimming with things i want to make (yes, i was pleasantly surprised to find lots of meatless grilling ideas). but it was this recipe that made me go "ohmygod ohmygod i have to make this NOW." i love avocados. but never had i ever eaten, or even thought of making, grilled avocados. what kind of avocado obsessive am i?

anyway, this recipe was all that i hoped it would be. the flavor of the grilled avocados was not so drastically different from normal ol' raw ones, which is probably at least partly because i had to use a grill pan and not a real grill, but i think the heat made them a little creamier and they were still warm when i put them on the salad which was nice. the grilled corn added another summery flavor and some crunch. the dressing was fantastic! it doesn't seem very close to "traditional" caesar dressing (which makes things easier for me!), the only non-vegan element was parmesan cheese which i replaced with almesan from veganomicon (you could also just go buy some vegan parm if you want. or maybe use some nutritional yeast?). loved the smokiness of the chipotles, especially since my grilling did not give me any smoky flavor. i definitely want to make this again and i think it would make a really great entree with some added (grilled?) tofu thrown in. below is the recipe as it's printed but, as i said, it's not too hard to replace the parmesan and make this vegan. 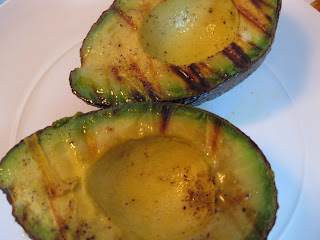 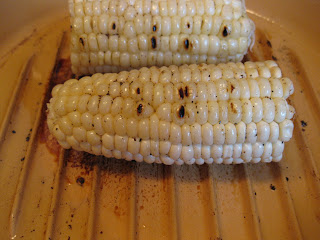 put parmesan in a medium bowl and add olive oil in a slow stream, whisking. whisk in lime juice, garlic, chipotles, and 1/4 teaspoon each of salt and pepper.

rub vegetable oil on corn and cut sides of avocados, then season with 1/8 teaspoon each of salt and pepper. grill avocados, cut sides down, and corn, covered only if using a gas grill, turning corn occasionally, until golden-brown, 3 to 4 minutes.

toss romaine with dressing and serve topped with avocado and corn.

I tried this the other night...The grilled avocado had a delicious, nutty taste. Who knew?