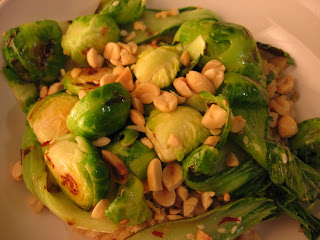 our dinner last night was inspired by a meal we had last saturday. after being on our list of places to try for probably about a year, we finally made it to eos wine bar and restaurant in cole valley. loved it! we sat in the wine salon (definitely their phrase, not mine), tried some wine flights and nibbled on a variety of small plates. two of those dishes being grilled bok choy with tofu and grape tomatoes and sesame roasted brussels sprouts. we combined the two into grilled sesame bok choy and brussels sprouts and served it over brown rice. i cooked the vegetables in our grill pan (which i love but don't use nearly as often as i should because i hate cleaning it) but if you don't have one i think it would work well in a normal old pan too.

get the rice going according to package instructions

in a small bowl, mix together the soy sauce, rice vinegar, mustard, honey, salt and pepper and set aside. chop the cilantro but keep separate for now.

heat your grill pan. brush the bok choy with olive oil and cook on each side for a couple minutes until softened and grill lines appear. once they're cooked, transfer to a regular pan. drizzle with a little sesame oil and sprinkle with sesame seeds and chili flakes to taste. toss for a minute or two. 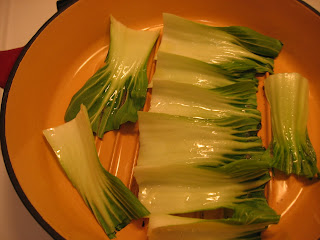 toss your halved brussels sprouts with olive oil to coat. cook in the grill pan the same way you did the bok choy. once cooked, move to regular pan to toss with sesame oil, sesame seeds and chili flakes. 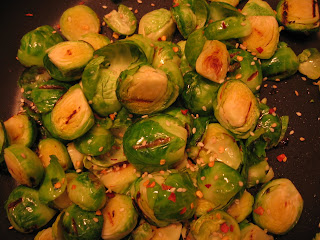 when the rice is done cooking pour the sauce over it and mix to combine. stir in the chopped cilantro.

serve the vegetables over rice and garnish with peanuts. 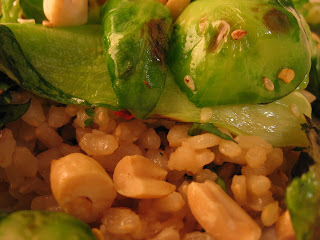 a simple and healthy dish