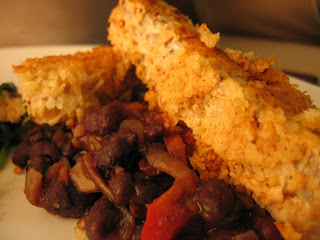 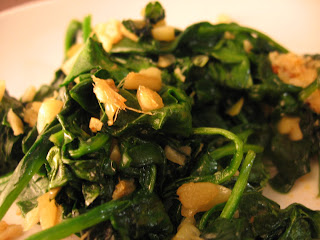 ...with black beans and garlicky ginger spinach. that's what dinner was tonight. i knew we had a lot of little things in the fridge that need to be used but the ones that kept popping into my head were about half a can of coconut milk and shedded coconut - both leftover after making dulce sin leche cupcakes (from "vegan cupcakes take over the world" which are delicious by the way). this was my first time coconut crusting and i do think it was a success! i always get jealous of those coconut crusted shrimp options on menus. i added some chili powder to the coconut for a little extra flavor in there. i cooked the components in the following order and - amazingly! - everything seemed to finish around the same time.

heat olive oil in a pan and cook garlic and onion until onion softens. add bell pepper and cook a minute more. add the salt, pepper and cumin and stir to mix them in. add the tomato and beans (juices and all!) and bay leaves. cook over medium heat until bean juices thicken and cook off a bit. meanwhile.....

heat a bit of peanut oil in a pan and add garlic and ginger. cook for a few minutes before adding spinach (in batches if necessary). cook until wilted. tempeh time!

for the tempeh**
8 oz. tempeh
coconut milk (half a can should do it)
unsweetened shredded coconut (3/4 - ish cup)
chili powder
peanut oil

cut the tempeh into 4 slices and steam for 10 minutes. ok...so really you should do this first while you're getting your bean things ready.

*i added the lime zest to the beans near the end of their cooking time. i'd never done this before but thought it might be tasty. and it was. but i'm wondering if maybe it would have been better finely zested and added to the coconut-chili powder mixture. hmmmm.....
**you could definitely replace the tempeh with tofu, but i like the nuttiness of tempeh and think it was a nice combination with the coconut.

you are on a roll, dar! (perhaps a roll made of easy bread???) so many good recipes all these days in a row! :)