when i was growing up we made shepard's pie quite a bit. it's such a comforting, delicious and pretty easy to put together meal. i don't know why i completely forgot about it, but i did until just a few weeks ago.

a couple of months ago while on a weekend trip to portland kris and i bought a little cookbook called "hot damn and hell yeah: the dirty south cookbook" it's actually two cookbooks in one! i never much liked southern food while growing up in the south (mushy veggies cooked with bacon was never my thing) but now i find myself itching to chicken fry some tofu (whatever that means....) and whip up some biscuits and gravy. while looking through the book for a dinner idea a couple weeks ago we decided on shepard's pie. their version and method are a little different from what we did when i was younger but i thought i'd shake things up and give it a try. 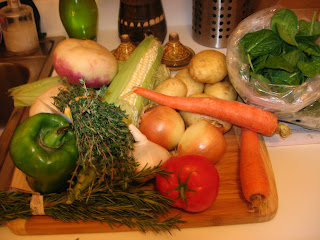 armed with fresh loot from the farmer's market, i sort of followed their recipe, sort of did what i remembered from long ago and ended up with a very tasty concoction. i really liked it cause it was filling but not too heavy and it also was yummy for lunch the next day (which is important to me cause i really hate buying lunch). now, on to the recipe!

*just a note...i had a good amount of veggies left that wouldn't fit in my baking pan. you could probably cut out a carrot here, a turnip there etc. and have the perfect amount. 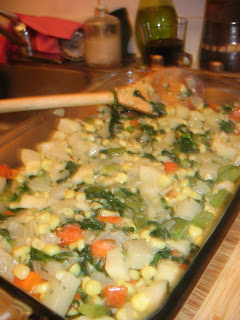 cut the potatoes into quarters and boil until soft. mash then with the milk and margarine and salt and pepper to taste. mix in the canned pumpkin. set aside.

while the potatoes are cooking, heat some oil in a deep skillet or pot and add the onion and garlic. after a few minutes add all of the other veggies (chopped into smallish cubes). cook until veggies are soft (but not mushy!)

in a small pot heat 2-3T olive oil and add the flour, stock/milk, rosemary and thyme and salt and pepper. whisk until smooth and let cook on low heat until thick. add this to the vegetable mixture and place in a baking pan. spread the mashed potatoes on top and sprinkle with nutritional yeast. top with tomato slices. 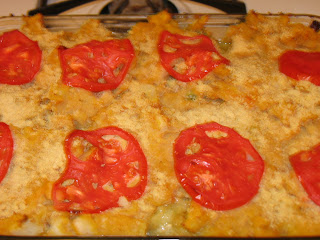 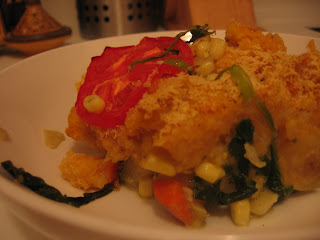 if you love cheese you can sprinkle with that instead of the nutritional yeast.