a few weeks ago we were invited to a tapas housewarming party. i thought it was the perfect opportunity to make mini empanadas!

i decided to do a potato-spinach-caramelized onion filling. it was a few weeks ago and i didn't write anything down but, from memory, i think it went something like this: 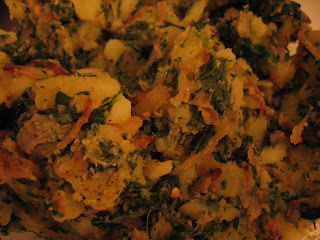 to caramelize the onion:
slice the onion and put in a pan with a little olive oil and a pinch of salt. cooking over high heat, stir occasionally until the onions turn dark brown in color.

to cook the potatoes:
slice each potato in half lengthwise and then cut each half into slices (so you have a bunch of half circles). put a little olive oil in a pan with the potatoes and cover. cook over medium/low heat until the potatoes are soft. check occasionally to make sure they are not sticking too much.

sautee the spinach in a pot until wilted.

once everything is cooked mix it all together and season to your liking. i listed the spices that i remember using but there might have been a little dash of something else. anyway, season until it tastes good to you.

i searched around on the internet for a dough recipe. i looked at lots of different ones and i don't remember where i found the one that i used but that's ok because i would not recommend it. most of the recipes had butter or oil or shortening....some sort of fat to make the dough nice and flaky. that should have been a hint to me that that is the right way to do it. however, i chose a recipe that was only flour, salt and water cause it seemed easiest. not so. the dough i ended up with was so stiff it was really difficult to work with and roll out. i got a really good workout for my arm muscles. the end result was really tasty but the dough baked into more of a cracker than a nice flaky crust. so pick a dough with some sort of fat in it. after you have your dough all set, do this: 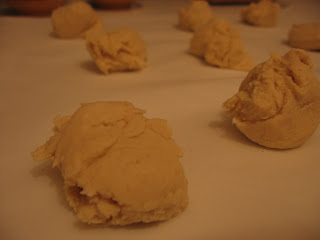 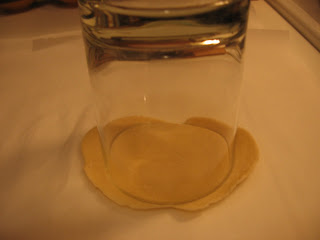 once you have your circles, plop a little bit of the filling on top (careful not to stuff to much in there or they pop open during baking). fold in half and crimp the edges closed with a fork. place them on a baking sheet and poke the top with a fork so the steam can get out while they bake. sprinkle the tops with a little bit of coarse salt. the dough recipe you choose will probably tell you temperature and baking time and all that good stuff. 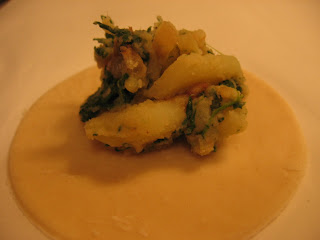 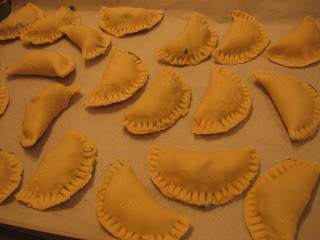 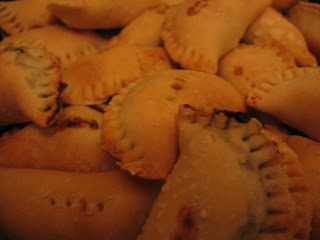 i definitely want to try these again with a better dough. although these were not bad (they all got eaten at the party!) i want a flakier empanada next time around.
-d.
Posted by Erin and Darcy at 4:18 PM

these look amazing!!! even though it is 10a here, i would eat these right now. mmmmm.
ps- i should probably stop commenting on every entry in this blog, eh?