i thought it would be fitting to begin my yum coast culinary chronicle with a discovery that has changed my life (really!) and inspired many of my recent cooking endeavors.

i love bread. a lot. but never thought to make it myself because i thought it was difficult and so i was scared. early this year, erin and i visited a friend in LA and during that trip i heard about the easy bread video. when i got home i watched and thought "yeah....i think i can handle that."
success!!! it was so easy and came out delicious! fluffy on the inside with a nice crust. i immediately began thinking about different kinds of bread i could make from this base. olive bread and rosemary bread (and olive rosemary bread!) were first time successes. my branch out to whole wheat bread was more of a learning experience. in my first attempt i replaced all the white flour with whole wheat flour. this resulted in a very heavy, dense loaf of bread that was not so good for sandwiches (but made great toast!). i did a half white half wheat loaf and that worked out much better. throw in some red grapes and walnuts for a fantastic breakfast loaf.
as i said, this bread is perfect for sandwiches. earlier in the week i bought two small eggplants at the farmer's market that i put in the oven when the easy bread went in. i left them in for 5-10 minutes after the bread came out to make sure they were nice and wrinkly and soft to the touch but not totally mushy. after they cooled for a few minutes i peeled off the skin (which i find really fun) and sliced them up. we also had some olive artichoke tapenade in the fridge that kris whipped up last weekend. combined with the eggplant, a sprinkle of rosemary salt and pepper, some sliced up baby tomatoes and a few leaves of butter lettuce this was a tasty dinner (and lunch). 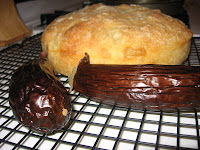 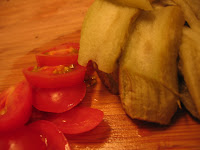 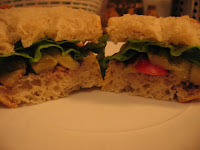 since baking my first loaf of easy bread i think i have spread the word to almost everyone i have had a conversation with (whether they wanted to hear about it or not....). easy bread made me conquer my bread baking fear and has created a sort of bread-product baking monster. i have many bready adventures that i can't wait to share....
Posted by Erin and Darcy at 5:19 PM

i knew easy bread was going to be your first entry dar!!!! i still need to try it ... perhaps this weekend even. i'm inspired.