pasta with chickpeas and charred tomatoes 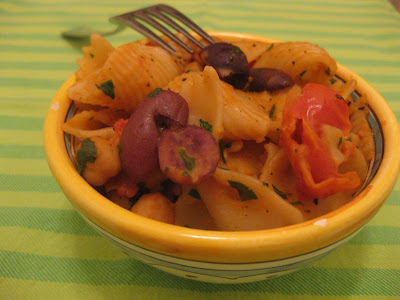 or as i like to call it, hummus pasta. it's been awhile since i've made a recipe from bon appetit and this dish was a nice welcome back. when i glanced at the recipe i thought it looked like a perfect weeknight meal, as easy as normal old spaghetti but something different from our go-to red sauce. upon eating the first bite i thought, "why didn't i think to use hummus as pasta sauce before? it's genius!" i will definitely be making this again...it's got smokiness from the paprika, juicy bursts from the charred tomatoes, saltiness from the olives, fresh herbiness from the cilantro plus whole chickpeas for an extra dose of garbanzo goodness. i also think this would be a fun recipe to play around with. as i type kris is in the kitchen whipping up a batch of his amazing sun dried tomato hummus....i think that would be fantastic in here, maybe with basil instead of cilantro for a more "traditional" italian pasta.

meanwhile, heat oil in a large skillet over high heat. add tomatoes; sprinkle with salt and pepper. cook until blackened in spots, shaking skillet occasionally, about 8 minutes. mix in chickpeas, garlic and smoked paprika. crush some of the tomatoes to release juices. add pasta and enough hummus mixture to coat. mix in olives and cilantro, season with salt and pepper.

as a side note, i am so happy that we sprang forward today. no more poorly lit dinner pictures, hooray!
Posted by Erin and Darcy at 3:00 PM