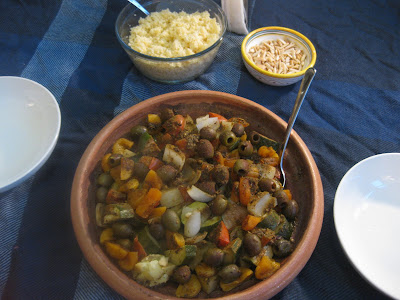 my mom sent kris a tagine for his birthday which means, really, she sent us a tagine. we have several tagines hanging around, like these cuties for salt and pepper... 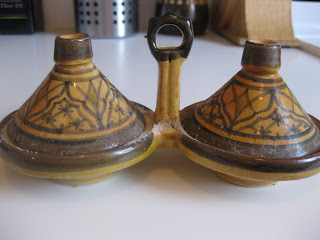 or these for bracelets 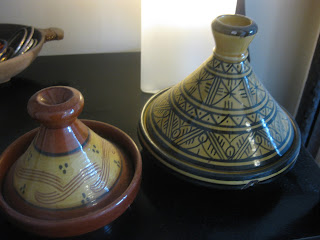 but i'm so happy to finally have one for cooking! 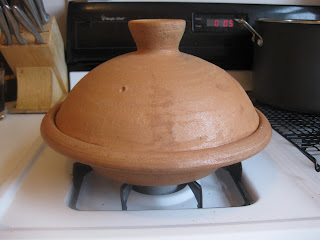 after going through the seasoning process of soaking (in which we learned it's extremely difficult to form a water tight seal over our kitchen sink drain) and then baking the empty tagine this beauty was ready to cook us some dinner!

we made this on a sunday night because, i'm not sure why, i thought it was going to take a long time to cook. but with about 5 minutes of chopping prep and 30 minutes-ish of cooking this would make an awesome weeknight dinner! we usually have farmer's market veggie medley dinners on tuesday but i predict a chunk of those dinners are going to end up in the tagine now. tagine tuesdays! i like it.

i looked at recipes as guidelines but didn't really end up following any of them exactly. what i took away from my brief research is that tagine cooking is pretty forgiving and if you fill it up with things that you like you're going to end up with an end result that you love. one thing i'll remember for next time is to add a bit more seasoning than i think it'll need. oh and one more thing, if i was doing this combination again (or any where one vegetable is likely to cook much faster than another) i would add the potatoes and then maybe halfway through add the zucchini because the poor zucs were a little too cooked i think....still yummy....but not perfect. i must say though, for a first attempt at tagine cooking this turned out great! here's what we put in ours:

place the water in the tagine and sprinkle some spices on top (i'd say i put 1-2 tablespoons) chop up the potatoes, zucchini, tomato, onion, olives and apricots and place in the tagine. sprinkle some more spice mixture on top. here it is all ready to go.... 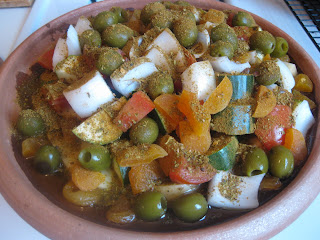 put the lid on and cook on medium low heat for about 30 minutes until potatoes are tender and the water in the bottom has thickened and turned a bit saucey. serve over cous cous and top with toasted almond slivers. like this! 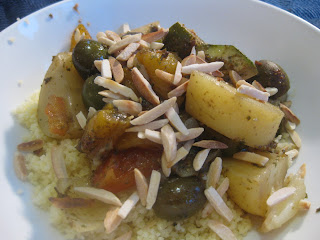 *i know, having this already on hand this made it almost too easy. if you don't have a premade moroccan spice mix here's what's in it: cumin, coriander, parsley, chili, cinnamon, turmeric, ginger, nutmeg, cloves, cardamom, sugar, salt and pepper and orange oil. so basically throw in a little of nearly every spice you have.

Happy birthday to Kris! Thanks for sharing the tagine recipe, I'd love to share this to our readers too in Foodista, I hope you don't mind. Just add the foodista widget for Moroccan tagine at the end of this post, and that should do it! Thanks. The widget will direct readers to this post when they go looking for tagine recipes such as this. :) Keep on sharing! xx