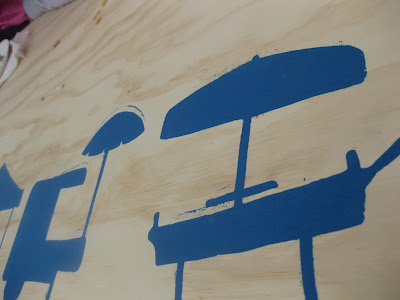 this past weekend was the san francisco street food festival. kris and i headed over to the four blocks crammed with food trucks and restaurant stands to have ourselves a nibble-y grazing lunch. 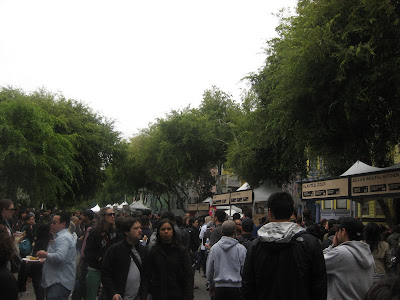 we got down there pretty early and it was already getting packed with some crazy long lines. there were tons of food options but when you cut that down to only the vegetarian ones and then even more to vegan options, our choices were pretty much made for us. which is fine by me cause i would have felt overwhelmed otherwise....and probably would not have been able to walk home from being so full (and yes, we still have to wear coats in august...unless you're super tough like that red shirt dude). 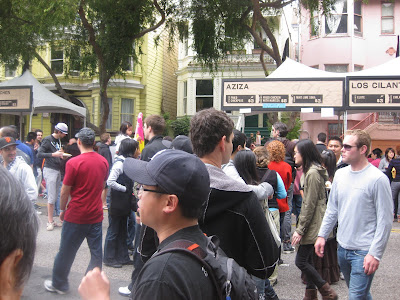 our first stop was aziza which also happens to be one of our favorite restaurants. we got a little cup of spicy roasted chickpeas (yum!) and a super refreshing mint lime (i think) soda (which was really more like tea). off to a good start! 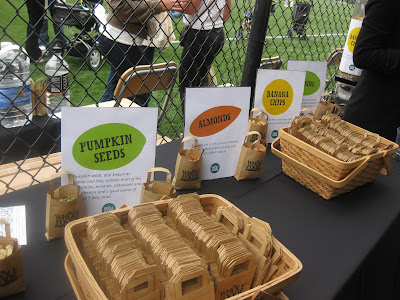 next we ran into a whole foods make-your-own trail mix table. we stuffed our little bags with banana chips, almonds, pumpkin seeds and cashews. didn't eat them yet though....they're coming with us on the long plane ride to europe later this week (thanks whole foods!). 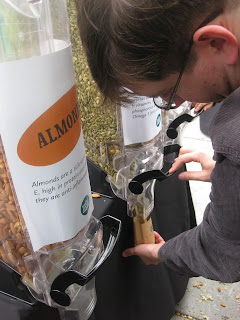 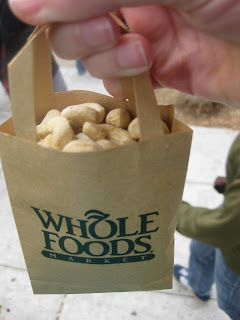 the next stop was the highlight for me. several months ago erin sent me an article about a falafel truck called liba in the bay area. besides having supposedly amazing falafel they also have a toppings bar. sadly, i never made the trip to try one. but on saturday there they were! and no line....what's wrong with people?! anyway, the falafels were, in fact, amazing. i might go so far as to say they are the best in san francisco. they even come close to the falafel at l'as du falafel in paris which is incredible. perfectly crunchy on the outside and nice and light on the inside...mmmm. our only regret is that we only go the taster and not the sandwich. 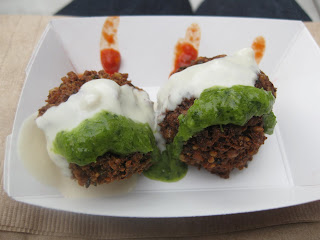 the good news is that they are now downtown some days so we will definitely get these for lunch and soon!

our last stop was tacos. 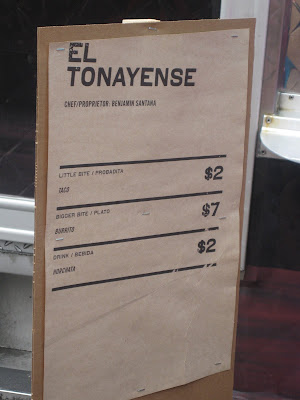 i really should have written about (and probably eaten) this before the falafel because it is a tough act to follow. i've seen this truck around but never stopped before. it wasn't amazing but it was definitely tasty. the green salsa was actually super yummy! 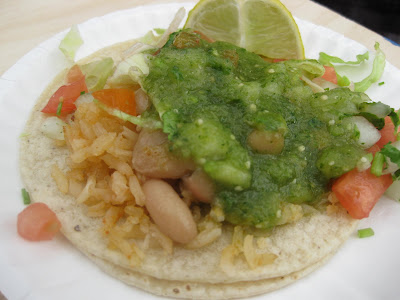 and that concluded our street food tasting. it was a lot of fun and i look forward to going back next year.....and getting liba falafel asap!

cool!! glad you had a good time- i was wondering how that was and wish i could have gone!

cool!! glad you had a good time- i was wondering how that was and wish i could have gone!

mmmmmmm wish i was there for this!!!