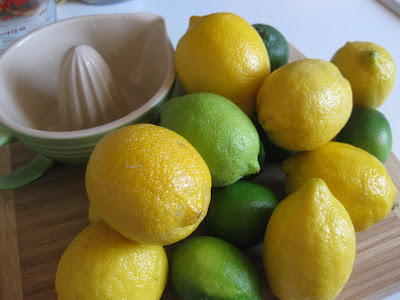 i'm not sure why we suddenly decided that we need to make our own sour mix. i can't remember the last time i bought the stuff and i wasn't really having a hankering for a sour alcoholic beverage of any sort, but when kris first mentioned the idea i was all over it. maybe it's because using fresh fruit and homemade syrups and mixes is the thing in bars now. or maybe it's just because i always love when i realize i can make something that is so far superior to it's store bought version (haHA i win!). either way this stuff is like a whole different concoction. with none of the thick, tooth cringey sweetness of store bought this sour mix is like the most awesome lemonade mix waiting to meet his alcoholic buddy. in our case that alcohol was jameson's* and though the whole whiskey sour thing never sounded particularly tasty to me this one was divine.

when we searched online for a recipe i was shocked (and appalled!) at the number that used corn syrup. i mean, what's the point? might at well save yourself a lot of squeezing and just buy a bottle. then i found a super simple one here and, while this whole idea is very basic and might not seem especially noteworthy, it makes a mean drink. and everyone deserves to know that the best sour beverage of your life (i predict this would make the most refreshing margarita ever) is just a few lemons (and limes and simple syrup) away.

mix 'em all together and drink up!

*and why did we just happen to have a nearly full bottle of jameson's hanging around? that would be leftover from the chocolate whiskey pies which you will hear more about later in an upcoming post that will be overflowing with pie-y goodness!