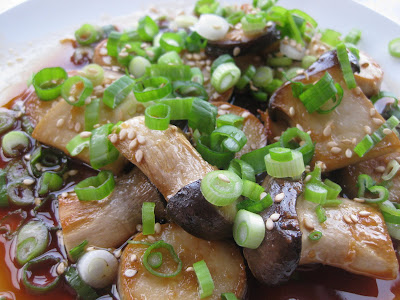 last weekend kris and i made a trip to rainbow grocery....we don't go too often so when we do it feels like a special treat and we splurge. which is really easy to do in a store with a mind bogglingly large bulk section, vegan treats out the wazoo and a produce section brimming with things i just can't find at our neighborhood stores. things like king trumpet mushrooms*! i've ordered these shrooms out before but this was my first time cooking with them at home and already i am in love. they're just so big and meaty and sturdy and they lend themselves so well to pan frying. they're pretty much begging you to slice 'em up and fry 'em. mmmmmmm. i winged it here and i must say this dish was a huge success....kris and i gobbled them down. 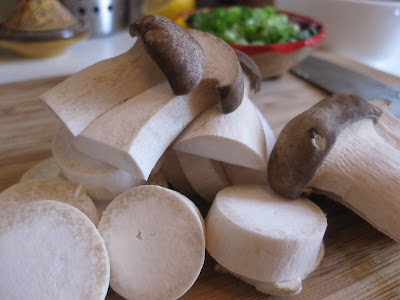 slice the mushrooms into 1/2ish inch slices. heat a thin layer of oil and cook mushrooms a few minutes on each side until lightly browned.

meanwhile whisk together all sauce ingredients.

when mushrooms are cooked arrange them on a plate and pour sauce on top. sprinkle with scallions and sesame seeds and enjoy!

*and fiddleheads which i also cooked for the first time. i thought they were quite tasty but i really didn't do anything much beyond steaming them. however, aren't they cute??? 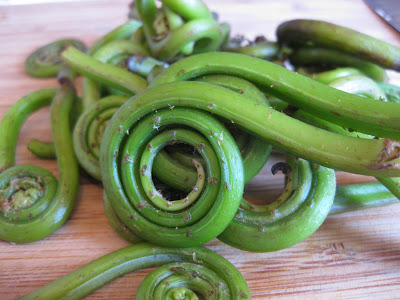 I love fiddleheads! They are very cute and there's a lot you can do with them. Going to go buy some more before the season ends...

any fiddlehead tips? this was my first time using them so i just steamed them and tossed with garlic and salt. thanks for the comment!