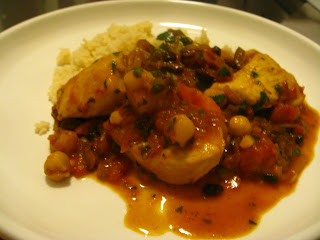 A friend of mine described me the other day as a "part-time vegetarian" which is an accurate description of my approach to food and eating. And I feel that this tagine, in some way, encapsulates that idea. It is a take on the Moroccan classic, well spiced and flavorful without being fussy. We opted to add chicken, as I was cooking with my more carnivorous family, but the recipe actually comes from a vegetarian cookbook (we very loosely interpreted it from New Vegetarian Entertaining by Jane Noraika. Ironic, I know. And honestly, it was perfect. And would have been perfect sans chicken. It makes a lot, and the leftovers are just as tasty. I can't wait to make it again. And again.

I am including a recipe for homemade harissa as well, but we used a canned harissa I had on hand. A warning - it is hot stuff!! Use sparingly. 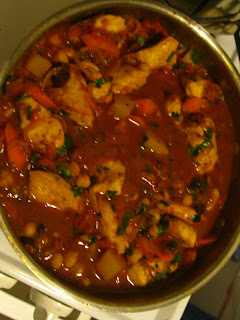 1. if using chicken, slice in strips, and brown in 4 quart saute pan. remove from pan.
2. add more oil to the pan, and onions and spices (turmeric, cumin, coriander, cinnamon) and the chile, and cook until the onions are softened and translucent, about 10 minutes. Stir in the tomatoes and tomato paste and cook for 10 minutes. And the currants, olives, potato and carrots. Continue cooking slowly over low heat for about 45 minutes, until the carrots and potatoes are tender.
3. return the chicken to pan (if using) along with chickpeas, and bring to a boil. Sauce should reduce slightly.
4. Stir in parsley and cilantro, season with salt and pepper. Serve over couscous, and drizzle with harissa.

1. Put the chilis in a dry skillet and cook over gentle heat until the skins begin to blacken and blister. Remove from heat, let cool, and remove the seeds.
2. Put the chilis and remaining ingredients in a blender or food processor and process until smooth. Sauce will keep, refrigerated, for 2 to 3 weeks.
Posted by Erin and Darcy at 1:01 PM

Every time I go to my favorite cook supply store, I cautiously eye the crimson Le Crueset tagine, but never give in due to the price. Somehow I never realized that I could make it just as well in a regular pot! Great idea :)

thanks! and if you want a tagine, try to find an authentic moroccan one. good friends of ours spent a year in morocco and think the le creuset version is way overpriced! (not that i don't love the le creuset; i have their grill pan and love it!)

Yay, Moroccan food! As Erin said, there is no reason for a pan to be so much money - ours was a dollar (maybe five, we got the fancy one) in Morocco, but we still often make the stew in a regular pan at first and serve in the tagine, top off. The tagine's main function is to force you to cook on a really low heat, mostly covered. Just find a circular dish to serve in.
The key to tagines is finding the right bread to eat them with. And the right friends.

Delicious! What a great recipe! Hope you can come over and share this yummy treat over at Foodista.com - the cooking encyclopedia everyone can edit. Would also love a link to this post from our site.(This will direct Foodista readers to your blog)Here's how you can create inbound links from our site Check it out here. This is a great way for you to build blog traffic and connect with other food lovers! See you there! Thanks!