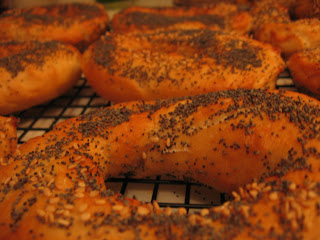 to those who know me, it's no secret that i love bagels. in fact i'm obsessed with them. aside from my wonderful friends, they are one of the very few things that i miss about boston. my love began when i was young as i have early memories of enjoying garlic bagels from the late royal bagel in atlanta. when i moved to boston i became a bagel snob thanks to my beloved bagel rising. after enjoying their deliciously perfect bagely morsels several times a week for years (and taking every single one of them for granted) it's no surprise that upon moving to san francisco my body went into bagel shock. san francisco is a wonderful city with many culinary treasures, but bagels? i was unemployed when we moved here and, i kid you not, i wandered this city and tried every bagel place i could find. katz bagels have become the go-to weekend bagel spot (and how convenient that they are only a few blocks from home AND they have tofu spread) but they are no bagel rising bagels.
that whole search got me thinking that maybe i should try making my own bagels. i mean, i'm not getting amazing bagels anyway...surely i can make non-amazing bagels and, who knows?, maybe they'll turn out better than i think!
i've been holding off posting about my bagels for quite awhile because i was waiting until i had them perfected. but let's face it, my bagels may never be perfect. and as erin pointed out, not everything needs to be perfect anyway. after several attempts, my best bagels thus far have come courtesy of my good friend the easy bread guy. you can see his bagel video here.......
naked bagels!
the first time i did just what he said. the taste was good but i thought they were too flat. so the next time i didn't roll them out as thin when i shaped them. much better! a bagel that was crispy on the outside and soft on the inside...just as a bagel should be. another recipe i tried used a different shaping method - when you cut your dough into pieces, instead of rolling them out, pick up each one and poke your thumbs through the center to shape into a bagel. that worked well too.
my favorite bagel is the everything bagel. and i don't like when people skimp on the everything. i like lots of seeds, onion, garlic...i like my bagel covered on the top and the bottom. so far i have only done sesame and poppy (cause that's what we always have in our cabinet) but i have not been successful in getting the seeds to stay on the bagel. sure some of them stay, but more fall off. i've tried rolling the bagels in seeds right after they boil when they're sticky, i've tried brushing them with a cornstarch mixture (in place of an eggy mixture) and then sprinkling. i've tried baking them for 5 minutes then taking them out and seeding and baking some more...it's always the same result. so, dear readers, anyone want to enlighten me as to how to seed a bagel? 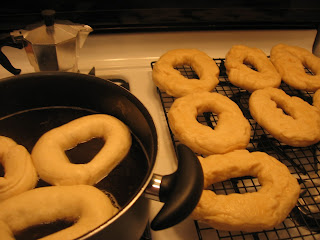 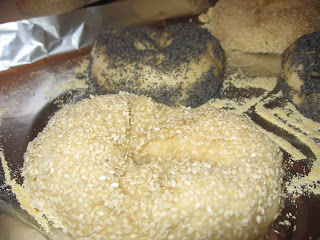 and yes, these pictures are from several different bagel baking attempts. you can see how the pre-baked seeded ones are nice and fat.
-d
Posted by Erin and Darcy at 2:23 PM

I am excited the day your bagel quest brings you to a satisfactorily garnished baked good. They've been given a bad reputation for awhile (read: the low carb craze), but we should really bring them back :)