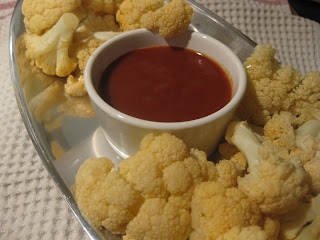 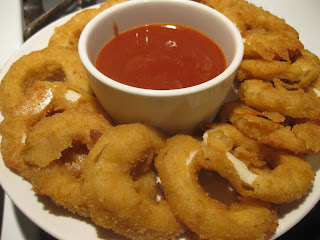 our dinner last night was pretty strange, it was a seafood feast...of sorts. i suppose it all started to take shape last month when we were in asheville for a little weekend getaway. we were browsing through (what we thought was a cute independent health food store but ended up being) whole foods and saw frozen vegan calamari*. 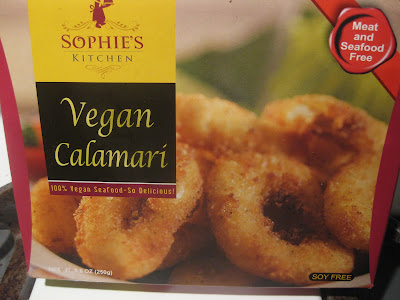 um. wait. whaaaaaaaaaaat??? we didn't buy it but when we got back kris saw it at sevananda and bought a box because, whaaaaaaaaaaaat!? i mean, we had to see what it was all about. so that's been sitting in our freezer for a couple of weeks.
then another strange seafood thing happened. i got the latest bon appetit and saw a recipe for "poor man's" shrimp cocktail which is really just cauliflower that you do some stuff to and then it turns into shrimp cocktail. i was intrigued and had to try it out. and kris remembered we had that calamari and so our vegan seafood feast was born.
now i never did like seafood or shellfish or anything of the sort but i wasn't too worried that our cauliflower and calamari asain mountain yams would elicit the same reaction from me. they didn't. but they were tasty in their own way! the cauliflower was just like nicely seasoned, lemony cauliflower. the calamari didn't have a lot of taste on it's own, it was really just like fried chewiness. what brought this whole meal to seafood land was kris's cocktail sauce. he thought cocktail sauce was just ketchup and worchestire sauce. i had no clue. turns out it's ketchup and horseradish but he worked some magic and mixed up a yummy cocktail sauce worchestire sauce and all. so that's the story of our vegan seafood feast. we rounded it out with some chard, not chard pretending to be salmon or anything nuts like that, just good ol' sauteed chard**.
if you wanna get in on the cauliflower, here's the recipe. it couldn't be easier. and if you close your eyes and think of shrimp cocktail you just might just fool yourself for a quickquick second. also note that this recipe is 2 heads of cauliflower so you might want to cut it in half.
ingredients:

*check that link...their website is pretty awesome.
**kris read that chard is a mood booster so i think everyone should add a bit more chard to their diet.
Posted by Erin and Darcy at 6:16 AM