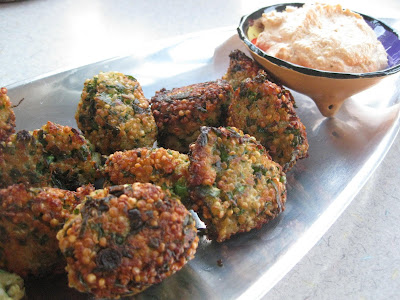 these are amazing. so amazing that i want to eat them every day. and easy enough that i probably could. if you watch top chef masters you might recognize these as half of mary sue's winning dish from the fast food challenge a couple of weeks ago. after watching eight? ten? seasons of top chef this is the first time i've ever made one of the recipes. sure, i've seen things on the show that i've thought about making before but then i go look at the recipe and it's too many steps/too many funky ingredients/too not do at home-y (i'm looking at you hector's tofu ceviche). but this was different! so simple there was no excuse not to make them.

i changed the recipe a bit to make it vegan and they turned out so well i have a hard time believing that the original version is any better. seriously. the first thing that makes these awesome is a little step that i alway mean to do when making quinoa but always forget...toasting it! yep, toss the quinoa around in a dry pan over high heat for a few minutes until it smells toasty and then cook as usual, it brings out a fantastic nuttiness in the quinoa that you don't want to miss out on.

the second thing that makes these awesome is that, despite being fried they are not greasy at all. we all know about quinoa's super health properties but i'm wondering if it also has an oil repelling quality because seriously, it's like they soaked up none of the cooking oil.

and the third thing that makes these awesome is crunchy on the outside soft and moist on the inside. perfection.

mary sue served hers with some kind of mayo something or other, i made a batch of aleppo aioli to accompany mine. mary sue served these as a side with quesadilla's, i went with the yuca tortillas from veganomicon. i did not want this dinner to end.

place a dry pan over high heat. add quinoa and toast for about 5 minutes, shaking and stirring constantly to prevent scorching. transfer to a pot and add water. bring to a boil, reduce to a simmer and cook, covered, until water is absorbed, about 10 minutes. set aside to cool.in a large bowl, combine cooked quinoa, flour, nutritional yeast, and salt. add onions, parsley, tahini and cornstarch mixture. stir thoroughly with a spoon until the mixture holds together.

heat oil in a large skillet over medium heat. form the quinoa mixture into fritters and add to the oil. fry until the bottoms are golden and brown. turn and fry the second side until golden. drain on paper towels and serve warm.

I am going to make these this week. Thanks for sharing!

Yum! These look and sound great. I might make them this weekend for my sisters baby shower. How many fritters does 1 batch make? Cheers

one batch will probably get you around 15 or 20 fritters

These are super awesome delicious! My proportions were random because I had left over cooked quinoa and didn't feel like doing the math :), I was out of green onions so put in some garlic instead, and I made mine rather flat - more like latkes, and they still turned out great. I could not stop eating them!!! I think you are right about the non absorption of oil.......but I didn't need to use much to fry them up anyways. Thank You.