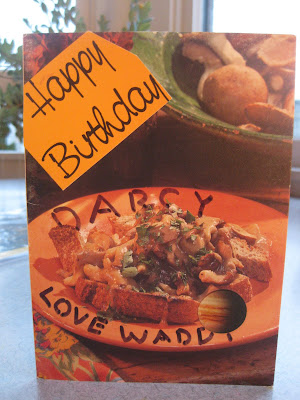 sometimes recipes come from unlikely places. like birthday cards. little did my dad know when he sent this that it was really two gifts in one...the fabulous gift inside as well as a hidden treat in this delicious recipe on the inside cover. this is way more delicious than what you would expect to find inside a card that looks like it was made in the '70s (though the back credits tell me that it is in fact from 1995). no matter! i whipped this up for a week night meal serving it on crusty bread (as the picture shows) and accompanied by a simple salad. i changed the directions a bit as my mushrooms seemed to be unusually slow to release liquid and didn't seem to have that much to release anyway. the point is that with a few less steps i still got a wonderfully buttery, thick glaze covering the mushrooms. oh also, they suggest 1 pound of oyster mushrooms and an additional pound of mixed mushrooms. well oysters are expensive so i say do as i did and mix the two pounds however you want, it's still going to be delicious. 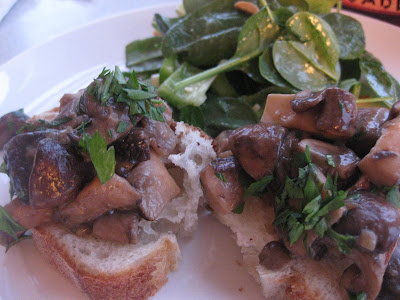 between the two of us this was a lot of food and we had lots of mushrooms left over. we used them the next day as part of a yummy quinoa bowl.

clean the mushrooms and cut into chunks.

in a heavy bottomed skillet over medium heat, melt the margarine. add the shallots and saute until translucent, 3 or 4 minutes. reduce the heat to low and add the mushrooms. cook, stirring often, until they begin to release their juices and create the beginning of a broth (5 to 10 minutes). raise the heat to medium and sprinkle the flour, salt and pepper over the mushrooms, then stir to evenly coat. add the wine and stir 3 to 4 minutes. by now the mushrooms will have reduced in volume by about one half. keep stirring until you have a nice thick brothy glaze covering all the mushrooms. sprinkle with parsley and serve over crusty bread.