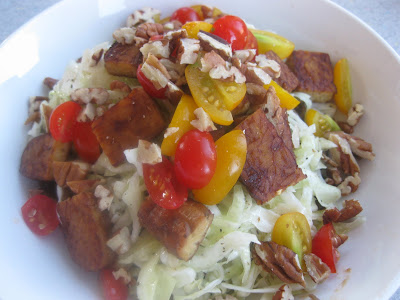 this, like so many of my dishes, was created as a cleaning out the fridge dinner. my main ingredients to work with were tempeh, cabbage and tiny tomatoes which made me think it's almost at TLT....but since there's cabbage instead of L i'll call it a TCT soba bowl (yeah, i put it all on top of soba).

so, that's one T for marinated tempeh, C for cabbage slaw and the last T for teeny tiny tomatoes...maybe it should be called TC(TT)T. oh and also toasted pecans because...why not? yum! i really really loved this (for dinner and again for lunch today). the slaw was very simple with a hearty dose of lime juice giving the whole dish a nice tart kick. the tempeh and noodles got a bit of heat from hot sauce, and tomatoes, well, they're amazing right now and can do no wrong. plus some crunchy toasted pecan bits? delicious! i feel like i so rarely recreate these fridge cleaning dinners that i make but this is one that i would really love to make again.

here's how it went down (i apologize for the lack of measurements but you're a smart bunch, you can make it to your taste):
TCT soba bowl
ingredients:
for the marinade:
soy sauce
hot sauce
olive oil
cumin
coriander
crushed garlic cloves

mix together all the ingredients in a shallow dish. cut the tempeh into strips and marinate for as long as you've got (mine were probably in there for about 20 minutes).
while the tempeh is doing its thing make a super simple cabbage slaw:
i thinly sliced about half of a small head of cabbage and tossed with the juice of 2 limes, olive oil, (big) salt and pepper.

halve or quarter (depending on their size) a handful of tiny tomatoes and set aside.

back to the tempeh. cook with a little olive oil and an little marinade added to the pan until browned on both sides. remove from pan and cut into bite sized pieces.

cook the soba according to package instructions. mine cooked for six minutes (and i found that starting soba and the tempeh cooking at the same time worked out well).

when the noodles are done cooking drain and toss with some of the remaining marinade.

assemble bowls with soba on the bottom topped with cabbage slaw and tempeh and tomatoes.
add some chopped toasted pecans on top. enjoy!
-d
Posted by Erin and Darcy at 7:47 PM